Flying from Kuala Lumpur to Bali on a sunny morning could have been a good journey, but no, am I wrong! Turbulence occurred midway as our airliner was crossing the Java Sea. Previous experiences told me that turbulence normally occurs if we are trapped in a bad weather or such. But in this case I can still see the clear blue sky outside the window! I braced myself and prayed that the three-hour flight would quickly pass. 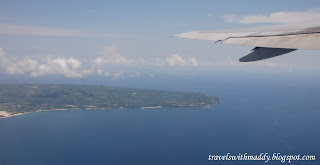 Landing at the Ngurah Rai International Airport in Bali, I was greeted by the whiff of incense and a statue of a character from Indonesia’s folklore; I guess it must have been the Garuda, based on its bird-like appearance. Though Indonesia has a large Muslim population, the majority of the people in Bali are Hindus. And, the Hindu rituals in Indonesia are unique and differred from Hindus from other parts of the world.
An acquaintance greeted me and asked if I had a good journey. I told him about the turbulence and he said, half-jokingly, maybe the Java Sea “ada banyak hantu” (has a lot of ghosts in there). Then he rushed me to a waiting car, and I didn’t get a chance to appreciate the architecture of the airport – which, on my first impression, is a mixture of modern and traditional Balinese design.
The Discovery Kartika Plaza Hotel in Kuta, a five-star hotel overlooking the sea, was where I stayed during the trip. Though my ground-floor room didn’t have a good view of the sea, but I am happy for getting a comfortable king-sized bed, stacked with lots of fluffy pillows, all to myself! 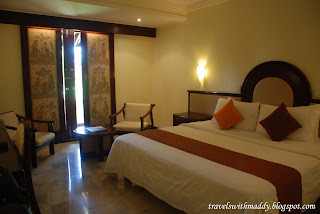 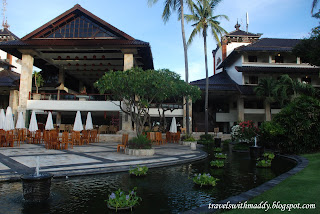 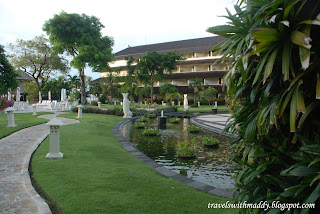 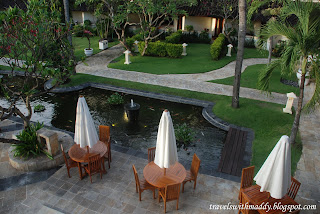 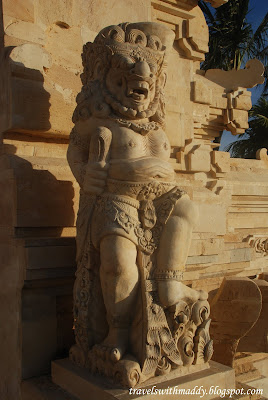 Several pictures around the hotel grounds.

I spent the afternoon exploring the hotel grounds, appraising its landscape and also its Balinese features – which were embedded in the form of Balinese gates, statues of deities and Indonesian mythical creatures, as well as a mini Hindu temple near the hotel swimming pool. 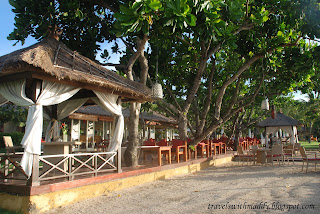 
There are other rules pertaining to how a visitor should behave when there is a religious ceremony inside a temple, but I could not make out the words as it had been smudged with time and weather. 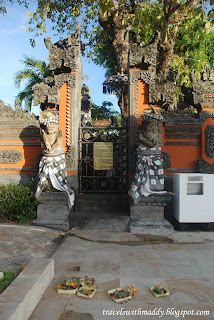 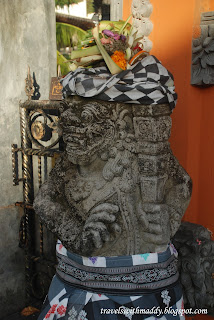 The small temple inside the compounds of Kartika Discovery Plaza Hotel

Now I realized why Bali is called the land of a thousand temples. It is said that there are more than 4,000 temples in Bali, and you can find it at places such as hotel grounds and also private home compounds.
Another attribute that interests me were small boxes of offerings to the spirits, which can also be found almost anywhere in Bali. The people would leave the offerings not only in the temples, but also at places such as the front of their shop and by the sea. The boxes are made of woven leaves (I believe it must be banana leaves) and filled with offerings such as incense sticks, flowers, as well as food items like biscuits and sweets (I saw a Kopiko coffee candy in one box). 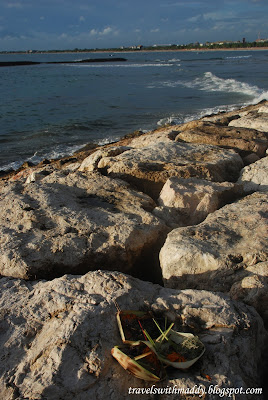 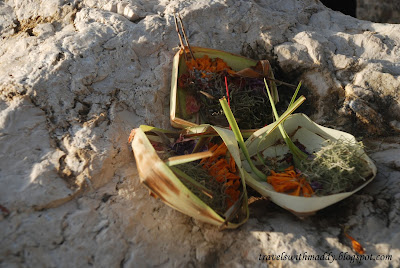 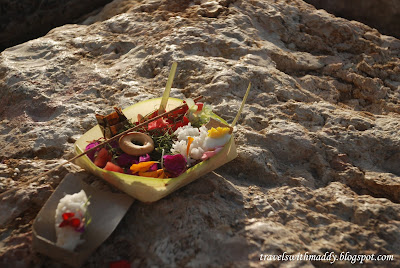 The back of the hotel opened towards the sea – yes, the sea and without the beach. I guess the seawater is deep there, thus the no swimming sign. People only fished there, and I saw an unoccupied boat floating not far away. There is a footpath along the sea waters, so I turned right and walked along. I could see a beach in the not-so-far distance, where people were playing kites, having fun and swimming in the sea.
As I walked along, I realized that there’s a shopping complex just next door of the hotel. The Discovery Mall, though not as immense and glitzy as those malls which can be found in bigger cities, has a sort of open souvenir and craft  ‘bazaar’. It sells a wide variety of items such as woodcarvings, Indonesian batik cloths, Balinese spa products, figurines, and Balinese coffee. 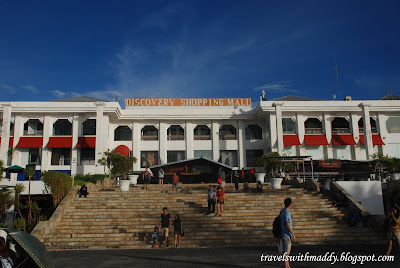 The Discovery Shopping Mall is just next door to the hotel

Then I left the mall and decided to have a walk at the beach. Many people set up stalls along the beach to sell items such as t-shirts, caps, and sunglasses. There’s also the solo peddler who walked along the path carrying their goods; they either approached tourists to sell, or they just spread their goods on the ground and waited for people to buy something from them. These peddlers also trade some amazing items, such as accessories made out of seashells and also kites the shape of a large vessel. 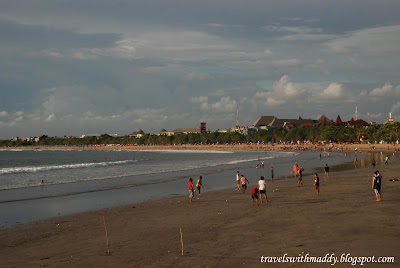 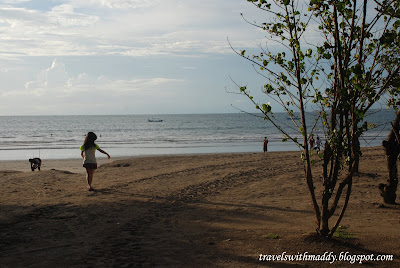 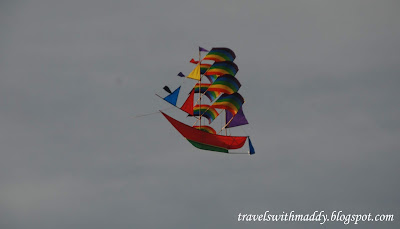 A flying ship? This kite is sold by several peddlers by the beach.

As my first day in Bali came to an end, I am very pleased to know that Discovery Kartika Plaza Hotel doesn’t only open up to the sea, but also to a wonderful sunset view. I spent quite some time photographing the setting sun, and the result was marvellous! 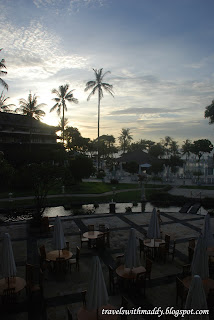 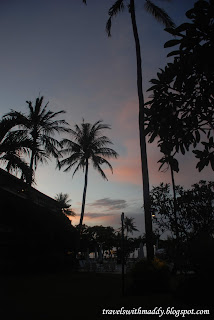 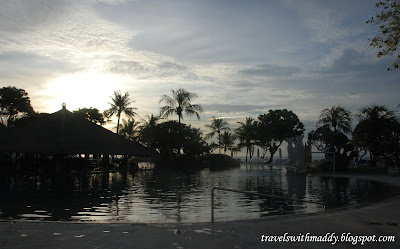 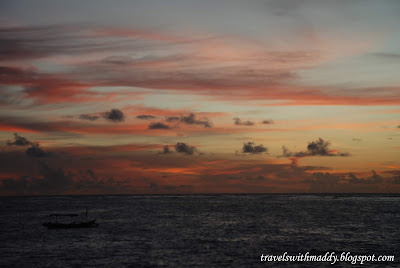 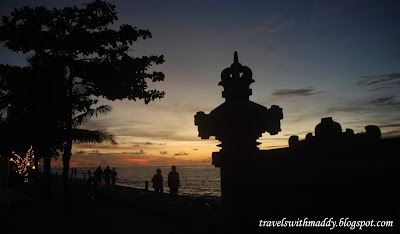 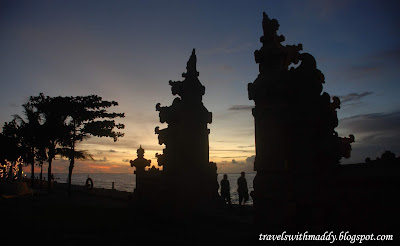