Al Safina Kijal Beach Resort is situated in the town of Kijal in Terengganu's Kemaman district. You will pass through local villages and narrow roads to get to the simple and laidback resort. Situated across a small road from the beach in a Kampung Che Wan, you can find peace by the beach, which is so far free from mobs of tourists or locals like in the Batu Burok beach, for example. 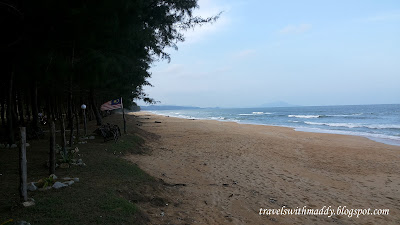 When I was there, the beach was free from the crowds
Room prices range between RM 150 to RM 200++, a rate I deem suitable enough for the modest beach resort. From the outside of the lodging block, I thought the rooms to be quite small and compact. I was surprised to find that some rooms can accommodate up to six adults at one time. 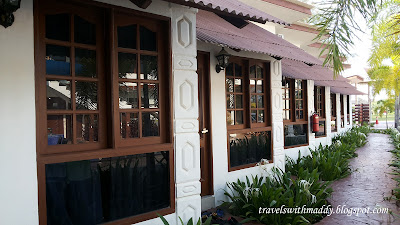 The row of hotel rooms. Cute, I say.
Basic amenities in each room are free wi-fi, a water heater system, basic toiletries, a refrigerator, and an electric kettle, amongst others. There are also a swimming pool, Muslim prayer rooms, a hall for private occassions, as well as the open-air Al Safina Restaurant. In short, all the basics found at most hotels are available here.
I was unsuspecting when I saw Middle Eastern-style cushions at the reception area. When I crossed the Al Safina Restaurant to get to the beach, I saw several shishas placed by the glass window of a back room near the kitchen. I glanced at the restaurant menu and realized that the restaurant serves a la carte Middle Eastern cuisine. And suddenly, I saw several Middle Eastern-looking individuals busying themselves in the restaurant.
I managed to ask the girl at the receptionist, and she told me that co-owners of Al Safina are Iraqis who migrated to Malaysia. Aah, now it is clear why the resort had some Middle Eastern influences. However, local Malaysians have been hired for jobs at the reception, housekeeping and restaurant service. Based on my observations, Middle Easterners are only hired to work in the kitchen (albeit also alongside locals) - most probably to ensure the restaurant can serve Middle Eastern dishes for their all day dining offer (as for breakfast, Malaysian dishes are available). 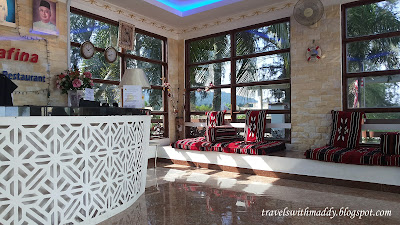 The hotel lobby has a Middle Eastern tinge to it.
At dinnertime, I tried several dishes at Al Safina Restaurant. The restaurant is not only open for residents at the resort, but also offers an opportunity for locals to enjoy Middle Eastern cuisine without having to venture far. I can see several local people park their cars by the beach and went dining at the restaurant.
I tried the Lamb Kabab and also the Mix Lamb and Chicken Kabab With Rice (I just didn't realize that I ordered two lamb dishes... and both are kababs).
The Lamb Kabab are minced tender lambs marinated in spices and grilled to perfection. Four pieces of lamb tenders are served with french fries and toasted bread. The combination of grilled lamb, crispy bread, fresh onions and yogurt sauce are just heavenly!
Meanwhile, the Mix Lamb and Chicken Kabab With Rice is an almost similar dish to the one I had earlier. Pity this time there are no crispy bread available alongside the meat!  Two pieces of lamb tenders and two pieces of chicken tenders are served with a mountain of rice. This one is also heavenly, although I preferred the lamb rather than the chicken. I gulped down the dishes and washed it down with fresh honeydew juice. 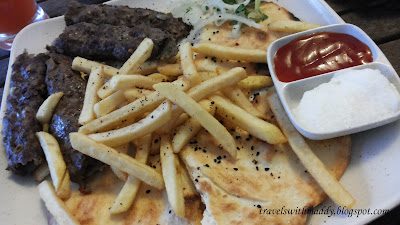 The Lamb Kabab
My stomach was still full when it was time for sleep. I had earlier found that next to my room was a young family with noisy toddlers. Surprisingly, I did not hear any noise when I entered my room. The next morning, while the kids next door splashed and had fun in the swimming pool - which is situated right in front of our rooms - I still enjoy a quiet morning inside my room. It was a pleasant surprise that noises entering my room are very minimal. Either the door and walls are quite thick, or the resort provides sound-proof rooms for its customers - which I believe to be unlikely. What's for sure is that I had been enjoying the quiet stay at Al Safina.
Posted by Maddy M at 15:11