The attractive interior was what brought me to the place for the first time. Its interior decorations screamed of a combination of Venetian elements with Breakfast at Tiffany's.
Tiffany blue sofas and cushioned chairs toned down the bold, black-and-white chequered tiles on the floor. Ornate chandeliers and rustic wooden tables add to the romantic setting.
At one part of the restaurant, wrought-iron tables and chairs are placed to bring life to its Venetian concept. Paintings of Venice, as well as fancy Venetian masks complete the interior decoration. 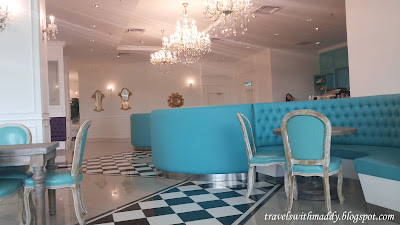 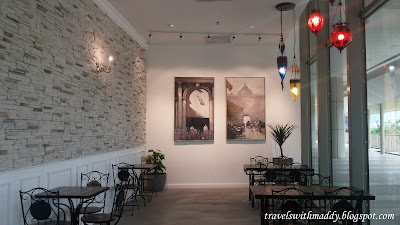 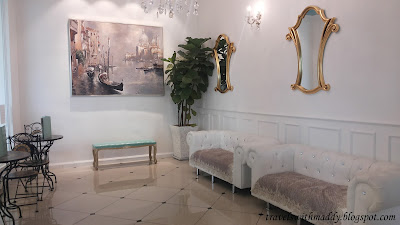 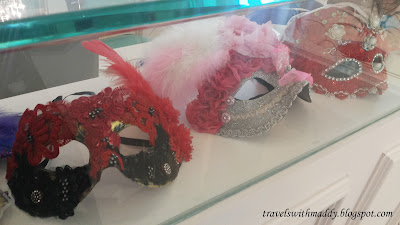 Monte Bianco serves fusion dishes, particularly Italian pasta dishes mixed with different palates of the world. I frequented the place ever since it was known as Perfume Dance Cafe; some of its menu may have undergone some changes after its rebranding.
One of my favourites here is the Spaghetti With Shrimps in Mentaiko Sauce. Although the shrimps inside the dish are not that many, the creamy sauce is fulfilling and yummy enough that I don't consider the spaghetti 'empty'. The dish is topped with crispy seaweed strips as a reminder of its Japanese 'heritage'. 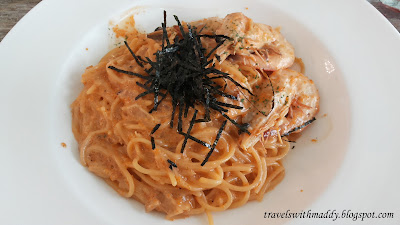 The Spaghetti With Shrimps in Mentaiko Sauce

The place once offered a pasta with a Malaysian touch, the Chicken Rendang Pasta, in which I immediately tried (not very sure if the dish is still available now). The pasta is strewn with a generous amount of chicken bits, but the creamy 'rendang' sauce tastes more like the mentaiko sauce rather than real rendang. Maybe the cream used to thicken the sauce has overpowered the rendang flavour. Nevertheless, it is still a delicious dish, given you don't judge it based on its rendang-ness.
I also had the Pasta With Chicken in Pesto Sauce. Two pieces of chicken breasts topped the pasta, which had been mixed with green pesto sauce. The sauce is very oily and the taste of olive oil was too overpowering for me. 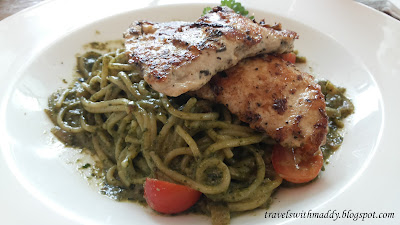 Pasta With Chicken in Pesto Sauce

I tried the Risotto Seafood once, and that was my first time having a risotto. I decided I'm not that into it. I don't really know how a good risotto should taste like, but my first impression says it is like eating sticky rice with nothing - unless a good amount of ingredients are added to bring in more flavour. Monte Bianco's Risotto Seafood comes with shrimps, squids, clams and olives, but maybe the way risotto is - thick, unlike plain old rice - just made me feel the seafood content inside the dish are not enough to cover its 'emptiness'. 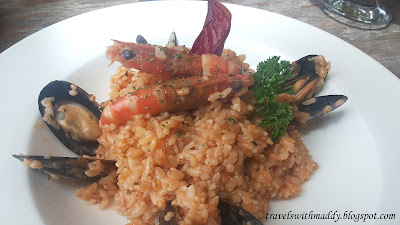 Moving away from its Italian fusion menu, I recently tried the Smoky Cheesy Grilled Chicken and it was completely fantastic. The chicken is so juicy and tender, while the sauce has enough smoky flavour that I thought I was having a grilled feast at Tony Roma's! 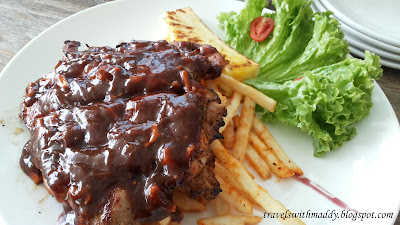 Monte Bianco also had several choices of dessert. I have tried the Waffle With Chocolate and Bananas, as well as one named the 'Dancing Diva'. The waffle is a bit too big a portion for me, with four quarters of thick waffle which comes alongside bananas and a small bowl of ice cream. The waffle dish is tasty, and would be nicer if more chocolate sauce is provided.
Meanwhile, the Dancing Diva is enough for at least two people to eat together. Initially I though it is a cake, but am I wrong. It tastes like bread cut into several big cubes and spread with ice cream. A stiletto-shaped white chocolate is placed on top as a finishing touch. 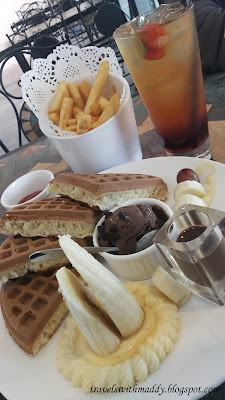 Waffle With Chocolate and Bananas 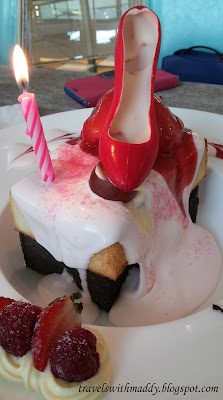 The Dancing Diva is topped with an edible 'stiletto'

There are a wide range of drinks available at Monte Bianco, including tea and an array of mixed fruit drinks. The mixed fruit drinks - most as thick as a smoothie - comes with quirky names such as 'Naughty Devil'.
To this day, I still frequented the place to enjoy the ambience.
Posted by Maddy M at 10:41