Fancy enjoying Japanese food for less than RM 20.00? I can still hardly believe that everytime I dine at Sukiya (available at several locations including Mid Valley Megamall, Uptown Damansara, IOI City Mall Putrajaya and AEON Bandaraya Melaka), I would only have to pay a bill totaling less than RM 20.00. Except for the Unagi-don (which is priced above RM 20.00), other dishes on offer here would mostly cost you around RM 15.00 including drinks.
Sukiya's signature dish is the gyudon, which is a bowl of rice topped with thinly-sliced beef simmered in a special sauce. Apart from its gyudon, a variety of noodles are also on offer. Its tagline "Tokyo Bowls and Noodles" says all about the menu on offer.
I have tried several of Sukiya's gyudons. My favourite would be the Osaka Okonomi Gyudon, which is particularly fulfilling with a mixture of cabbage, mayonnaise, okonomiyaki sauce and some sort of meat floss added on top of the rice and beef. It also comes with a wobbly, perfectly poached egg in another small bowl to top the dish. Carefully pour the egg onto the rice and let the yolk burst in your bowl! 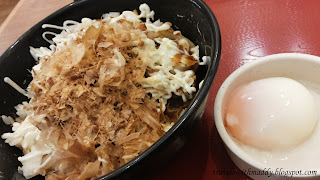 The Osaka Okonomi Gyudon comes with a poached egg 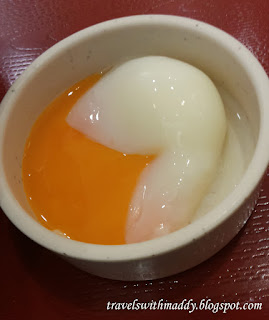 When the wobbly round egg bursts...

There are also the Three Cheeses Gyudon (gyudon topped with three types of cheese) and the Snow White Cream Gyudon (gyudon served with mixed vegetables in a creamy white sauce). 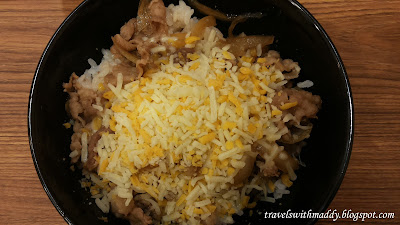 The Three Cheeses Gyudon
Other rice dishes I have tried here is the Teriyaki Chicken Bowl: rice served with tender, boneless chicken marinated in teriyaki sauce. Then there is the Tokyo Oyakodon, pieces of chicken meat and egg served on top of the rice with spring onions. According to the explanation included in the menu, "oyakodon" literally means "parent and child bowl", which directly refers to the chicken as the "parent" and the egg as the "child". 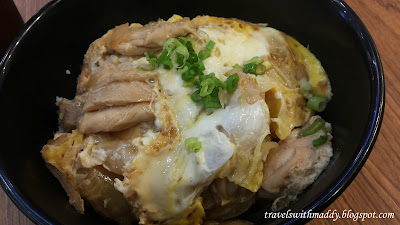 The combination of chicken, egg and spring onions goes well with each other to produce the scrumptious Tokyo Oyakodon. 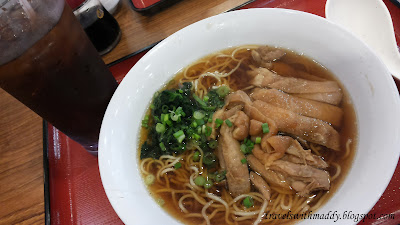 Tokyo Ramen with Double Chicken Meat
As for the ramen, I had had the Tokyo Ramen With Double Chicken Meat. The shoyu soup is totally perfect and the steamed chicken meat is so juicy that I felt fortunate to have ordered the one with "double" chicken meat (there is another, the Tokyo Ramen With Chicken Meat, which obviously contains lesser chicken pieces).
Oh, by the way, please note that prices of some dishes vary depending on the size of the bowl - you can choose from sizes S, M, to L accordingly.

For Muslims, rest assured that Sukiya is certified halal so you can enjoy the dishes without doubt.
Apart from its affordable pricing, I also like the fast service at Sukiya. I have never been kept waiting for my food - it usually arrives within ten minutes or less. I usually spend about 30 minutes at the outlet. Save money, save time! :)
Posted by Maddy M at 23:54